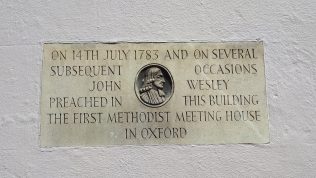 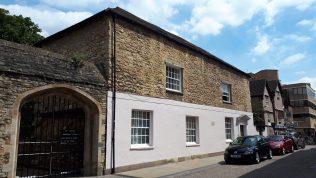 zoom
The building can still be seen on the east side of New Inn Hall Street.

Oxford’s Methodists worshipped in this building, from at least 1783 until 1817.

It is not clear whether a specific building was used for services before this time or whether meetings were held in members’ homes.

A plaque recording that John Wesley preached here was installed in 1968.

Methodism had a hard time in Oxford during the years after John Wesley’s death in 1791.  Congregational numbers were not large and they might have dwindled away completely, considering that most of the inhabitants of Oxford depended for their living one way or another on the University which opposed Methodism.

In 1792 an angry mob of students and others attacked the building and worshippers were beaten up following the publication of a sermon which warned against the so-called dangers of non-Anglican worship. Non-conformism was portrayed as ill conceived, dangerously led by uneducated preachers and dubious in its patriotism – a particularly alarming suggestion in the light of the international situation at the time with republicanism being established in America and France.

Despite these setbacks and partly due to unexpected support from benefactors, in 1815 Oxford Methodists decided to build their own chapel. One of the first challenges was to find a suitable site.

Read more about the new Chapel