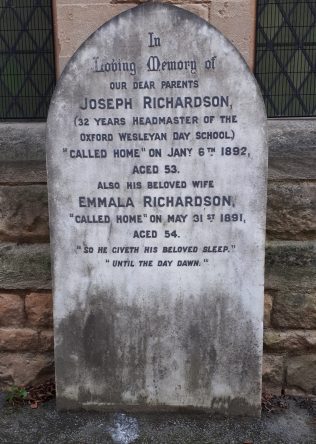 Joseph Richardson was a committed Methodist who transformed the Oxford Wesleyan Day School into one of the best elementary schools in the country.

Richardson was born in Lincoln in September 1838, the son of a warehouseman. The family were committed to Methodism, to self-improvement and to political activism: Joseph’s brother William became Mayor of Lincoln and his brother John, an engineer, was a radical with strong socialist sympathies; both built successful business careers in Lincoln.

Joseph left Lincoln to train as a teacher at the Wesleyans’ Westminster College in London, and in 1859 he succeeded J.W. Sixsmith at the head of the Oxford Wesleyan Boys’ School, which was located in the grounds of the New Inn Hall Street chapel.

Over the next thirty-two years, Richardson transformed the school into one of the best elementary schools in the country. The curriculum was steadily extended, new facilities were built, university students were recruited to give extension classes and lectures, and a succession of H.M. Inspectors, including Matthew Arnold, praised Richardson’s achievements.

An estimated 6590 pupils passed through the school during those years. At the same time Richardson played a leading part in creating professional associations for teachers in the city and the county. Beyond the school, Richardson served as treasurer of two benefit societies for working women in Oxford, and stood unsuccessfully as a Liberal candidate for the city council in 1889.

Meanwhile, he led a large and successful Class at the New Inn Hall Street chapel, and brought his educational expertise to bear in the Oxford Wesleyan District and in the Wesleyan Conference, serving as a District representative to Conference and member of the Connexional Education Committee. He was a Circuit Steward, Sunday School Superintendent, strong supporter of the Temperance cause, and a familiar figure on the platform of many religious and philanthropic meetings.

This strenuous activity was made possible by a strong partnership with his wife Emmala (1837-91). Two of their sons took degrees at Oxford University, and were members of the Wesley Guild (forerunner of the John Wesley Society) in the early 1890s.