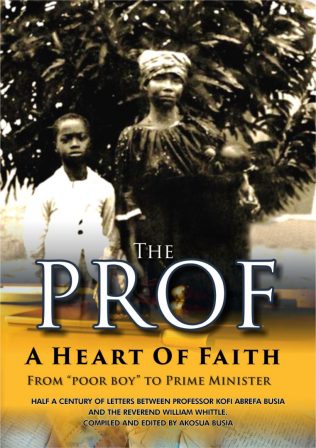 zoom
Book cover featuring Kofi standing by his mother, holding an infant, one of Busia’s younger brothers. The picture was taken, by Rev Whittle, the day Busia was to take his Mfanstsipim school entrance exam. His first white suit was home made for the occasion.
Busia Family 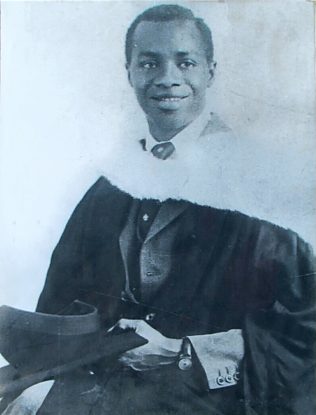 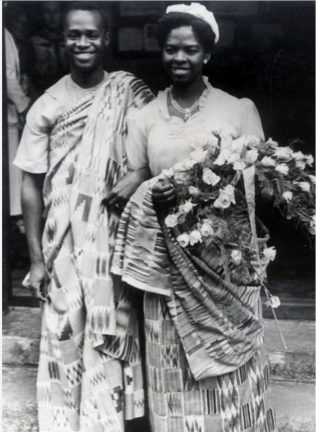 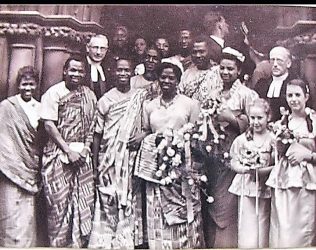 zoom
The wedding party of Kofi and Naa Busia, photographed for the Oxford Times August 1950 under the headline 'An All African Wedding'.

Kofi Abrefa Busia was a Ghanaian political leader and academic who was Prime Minister of Ghana from 1969 to 1972. His connections with Methodism and in particular with Wesley Memorial Methodist Church in Oxford are less well known. His family has kindly set these out for us in this biography:

Kofi Abrefa Busia (11 July 1913 – 28 August 1978) was born in Wenchi, the Ashanti Colony of the then Gold Coast, now Ghana. His life-long commitment to Methodism began when Reverend William Whittle and his bride Alice arrived in Wenchi, on their honeymoon, in 1920, to help establish Wenchi Methodist Church. On their arrival, they were introduced to seven year old Kofi Busia, nephew of the Paramount Chief. This meeting with the young Busia began Busia’s life long commitment to Methodism and a relationship that lasted more than half a century.

In 1927, with the encouragement and tutoring of Rev. and Mrs Whittle, Busia sat for, and won a Methodist Synod Scholarship to Mfantsipim the prestigious school for boys in Cape Coast established by Methodist Missionaries in 1876. After matriculating from Mfantsipim, between 1931-1934, Busia became first a trainee teacher and Methodist Lay Leader, then a staff member teaching at Wesley College, Kumasi, where he met other Wesleyan Methodists with whom he developed life-long friendships. Chief among these were the Principal of the college, Rev Charles Wesley Armstrong (d. 1948) who became a mentor to the young Busia along with Rev. Maurice Giddings (1896-1968) with whom Busia shared regular early morning devotions.

Busia read Politics Philosophy and Economics at University College, Oxford from 1939-1941 just at the outbreak of WWII. After going back to Ghana and accepting a commission as one of the first two Africans in the British Colonial Service, Busia returned to complete his DPhil at Nuffield College in 1946-47.  Whenever at Oxford, Busia worshipped at Wesley Memorial Church and was an active member of the John Wesley Society.

Busia returned to Oxford in 1950 at the end of a lecture tour of the United States, Canada and England, this time to be married. His bride, Naa Morkor Bruce, a midwife he had known in Ghana, was just finishing a year of nursing practice at the Churchill Hospital and they married at ‘Wesley Mem’ before returning home. Reverend William Whittle officiated at the marriage on August 14 1950. Rev Maurice Giddings who also took part in the ceremony, gave the address, and his daughter Rachel was one of the bridesmaids. Thirteen years later in 1963, when Dr. and Mrs Busia had returned again to Oxford their ten-year old daughter Abena was one of Rachel’s bridesmaids at her wedding to Rev. John Anthony Newton, (1930-2017) CBE, the distinguished Methodist Minister and scholar who became President of the Methodist Conference.

After their wedding Busia and his bride returned to Ghana where he took up his position as Chair of the Department of Sociology. During those years there was much political turmoil and Busia became increasingly engaged in the concerns of nation building and the struggle for Independence from British Colonial Rule.  At Independence in March 1957 he was elected The Leader of the Opposition.

By 1962 however, Busia was in exile from Ghana with his wife and children. He became a Fellow of St. Antony’s College, Oxford. In addition, under the auspices of the World Council of Churches, he conducted a study of Urban Churches in Britain at Selly Oak Colleges in Birmingham. This was the first time an African Sociologist had conducted a study of the British rather than the other way around. With his wife and children, he became once again a regular member of the Wesley Memorial church family. Among those with whom he re-connected at that time were Mrs Margaret Eddy (1908-1984) and her husband Mr. Chris Eddy (1906-1999) who, after a distinguished career in Methodist Missionary Education Service in Ghana, (including serving as Vice Principal of Wesley College), had returned to England and become Vice Principal of Westminster College where Mrs Busia, a trained mid-wife before her marriage, entered as an adult student in their teacher training program.

The government of the First Republic ended in a coup d’etat in 1966 and Busia returned to Ghana. In 1969 he was elected Prime Minister of Ghana, in a landslide victory, unbeaten to this day. In 1970, while Prime Minister, Busia had the singular pleasure of inviting Reverend and Mrs. Whittle to return to Ghana as his personal guests to celebrate their Golden Wedding Anniversary. As part of the celebrations, Busia journeyed with them to his home town of Wenchi, where they had been stationed 50 years prior. It was a joyous landmark of their friendship. Mrs. Alice Whittle passed away shortly after their return to England.

In 1972 Busia’s own administration was also overthrown in a coup d’etat and Busia returned to Oxford for the last time.  He died, still in exile, in Oxford in August 1978. Reverend Whittle was called upon to pray over Busia’s body before his final journey from England to Ghana. He delivered an address for Busia at Wesley Memorial Church and at Heathrow airport before Busia’s body was flown home for a State burial.

In December of that same year Rev. Arthur Banks, (1910-1990) a friend of the Busia family since the early 1940s at the start of Banks’ thirteen year tenure as Principal of Wesley College Kumasi, delivered the Eulogy at the Memorial service, also at Wesley Memorial Church.

Reverend William Whittle who outlived Kofi Busia by more than a decade, kept and made available to the Busia family all the letters he had received from Busia for over 50 years. The Audio book of letters of their fifty-year friendship is planned for release in October 2020, the centenary of the meeting which changed both their lives.