You are here: HomenextPeoplenextMinistersnextMinisters at the Wesleyan Chapel, New Inn Hall StreetnextGeorge Maunder 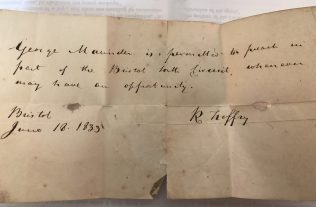 zoom
Original note to preach, signed by Richard Treffry in 1833. 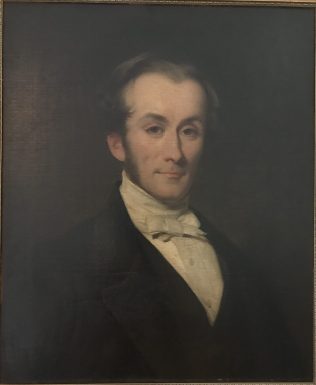 Although Revd George Maunder only spent the last two years of his ministry in Oxford, due to his successful fund-raising for the new ‘Wesley Memorial’ chapel and his tragic death before its opening  in October 1878, he will always be associated with the city. Nevertheless his fuller life story is full of interest and his wife’s contribution to his success should also not be overlooked.

George Maunder was born in December 1813 in France, where his father, Thomas Maunder, was serving in the military campaigns against Napoleon. Within five days of his birth it seems that the army had to change their position – a move which included fording a river. Somehow the infant survived (carried it is said on a soldier’s saddle-bag) and even more miraculously so did his mother, who had to wade through the waist deep water herself.

Six years later Thomas took his discharge from the army and the small family of three settled in the Bedminster area of Bristol, becoming members of the Wesleyan Society in the Bristol (South) Circuit. George was apprenticed to a printing business, but does not seem to have served his full time to that trade. He became more involved with the Methodist society, taking the familiar route through Sunday School teaching, to Local Preaching and then on to candidating for the Ministry.

In 1835 he was selected to go to Shepton Mallet and from then on he was moved, as was the custom, on a regular basis to a wide variety of circuits including the Isle of Wight. Most of his appointments thereafter were in major towns and in London.

In 1840 he married Mary Ann Frid, the daughter of Thomas Frid, ‘a noble spirited Methodist of the old school and a member of the Peckham Society’. Neither George nor Mary enjoyed very good health but their devotion to their Christian calling and to each other sustained them in their work. Although quite shy and retiring, they were much loved and appreciated by the Circuits in which they worked. They had seven children, and by the time they moved to Oxford, were enjoying the pleasures of being grand-parents.

It was during the 1860s, when he was stationed at Lambeth, that George Maunder first publicly advocated total abstinence – a stance for which he became increasingly well known – although it was not universally welcomed among Wesleyan Methodists at that time. Nevertheless, the Temperance Magazine, started under the joint editorship of George Maunder, T B Stephenson and Charles Garrett, saw its circulation figures steadily rise.

In 1876 he was appointed to Oxford where he became Chairman of the Oxford District. He took on the added responsibility of raising urgently needed funds for the new Methodist chapel. Of Oxford Methodism he wrote soon after his arrival “It is by far the feeblest I have ever been connected with. It needs a new chapel and much more to raise it.”

Despite his known tendency to exhaust himself, having raised a considerable figure from supporters in London, Maunder set about a punishing fundraising schedule in the early summer of 1878, visiting Liverpool, Southport and Manchester. Not stinting on his duties when he returned, his health broke down and despite hopes that he would recover with rest and medical care, he died at the manse, then on Blackhall Road, on 21st June 1878.

Mary Maunder, who had worked tirelessly to support her husband and looked after all aspects of their home life so that George could devote himself to his ministry, died just six weeks after her husband.

After George’s death, one of his colleagues wrote: “if ever there was a home hallowed by simple piety, lit with cheerfulness and warmed with love, it was this.”

A beautiful stained glass window, dedicated to George Maunder, was installed above the balcony in the new chapel, with funds raised by his ‘Temperance friends throughout England’.