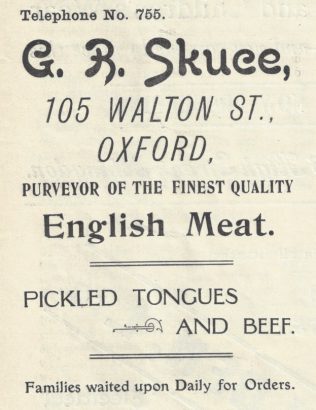 Arthur’s family ran a butcher’s shop in Walton Street. He went to France in November 1914 and was in active combat  over the next three years, gradually being promoted as men died around him.

Arthur Skuce was born in Oxford in 1892. His father was a traveller in coal, and two of his siblings were baptised at Walton Street Methodist Church.

By 1899 Arthur’s father had a butcher’s shop at the family’s home in Walton Street. By 1911 one of Arthur’s brothers ran the shop and Arthur was living with his parents in East Oxford. Now aged 18, he was a shop assistant in a gentleman’s outfitters. Sadly in March 1914 his father died.

In November 1914 Arthur appears to have gone to France as a Private in the Seaforth Highlanders, which drew in a number of Oxfordshire men. But in August 1915 he was appointed Second Lieutenant in the 9th (Reserve) Battalion of the Oxford and Buckinghamshire Light Infantry.

Then in September 1916 during the Battle of the Somme he was posted to the 6th Battalion, which had lost two thirds of its strength. Arthur was immediately in the front line, and his battalion suffered heavy casualties attacking Transloy. At some point he was promoted to Lieutenant.

In January 1917 Arthur’s battalion was back defending the front line, and in March they followed the German retreat. In August they were attacking near Ypres, and Arthur was promoted to Captain. Then in September he was seriously wounded leading his company in an attack, and was evacuated to Queen Alexandra Military Hospital at Millbank. He died on 8 October 1917 at the age of 24.

Arthur’s funeral took place at Wesley Hall, later renamed Cowley Road Methodist Church. There was a procession down the Cowley Road with a pipe and drum band, and he was buried at Wolvercote Cemetery.