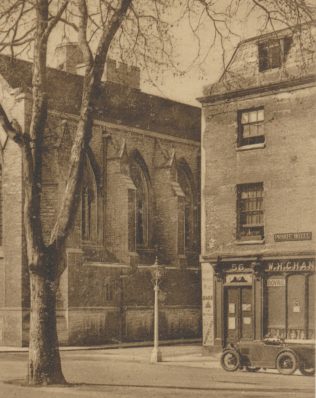 William’s father was a grocer who eventually owned a shop in St Giles. William joined a Field Ambulance so would not have carried arms.

William Frederick Chandler was born in Summertown in 1892. By 1901 his father was a grocer’s manager and the family lived in Beechcroft Road. He had two younger brothers.

From age 12 to 14 William went to Oxford Boys’ High School as a Free Scholar, then left to become an under-assistant in the Bodleian Library. However shortly afterwards he was apprenticed to an ironmonger, and by 1911 he was an ironmonger’s assistant in Thame, aged 19. Subsequently he moved to work for a company in Bedford.

William enlisted in 1916 and served as a Corporal in the 44th Field Ambulance of the Royal Army Medical Corps. This was a mobile front-line medical unit, and was not armed. The Division they were assigned to fought at the Somme in August 1916, and were in action in the battle when tanks were used for the very first time. The 44th lost 8 men compared with their colleagues the 43rd who lost three, and the 42nd who lost two: they must have been well in the front line.

The division was not in action again until March 1917. But by then William had died in Oxford, aged 25, and was buried at Wolvercote on 13 March. It is likely that he had caught some kind of infection, and he may have died at home with his family. He is listed on the Oxford Boys’ High School war memorial.

Both William’s brothers served in the war and survived, and his brother Charles ran the family grocery at 56 St Giles (now an Oxfam bookshop) from 1932 to 1945. Both brothers died in Oxford in the 1970s.