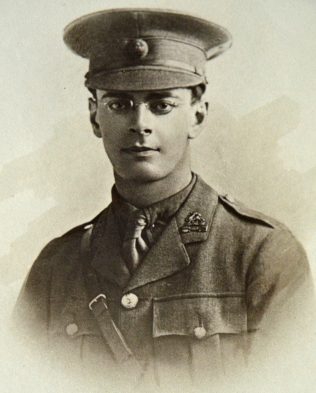 Alfred was an outstanding scholar who enlisted after one year at Oxford. Serving at the Somme he contracted trench fever and was sent to Somerville College to recover.

Alfred Peel was born in 1895 in Lancashire. His father was a Methodist minister. Alfred went to Kingswood School, Bath, a Methodist foundation, but when he was 15 his father was moved to Yorkshire and Alfred transferred to Bradford Grammar School. He was an outstanding scholar, coming first in the Scholarship Exam for Corpus Christi College Oxford. On leaving school he qualified for eight prizes: it was decided to award four to the second-best candidates.

The only officer left

Alfred started at Oxford in 1914, joining the University Officers’ Training Corps and the students’ Wesley Society at Wesley Memorial Church. After his first year’s studies, he enlisted. In May 1916 he joined the 6th Battalion of the Royal Berkshire Regiment as a Second Lieutenant, as it was preparing for the Somme offensive. Their first attack was successful but costly, with 12 of the 20 officers killed or wounded. Only weeks later the unit sustained 40% casualties: at one stage Alfred was the only officer left. He contracted ‘trench fever’, transmitted by lice, and was sent to Somerville College to recover.

Returning to the Somme in January 1917, Alfred became battalion bombing officer and later intelligence officer. Early on 5 May the unit moved into the front line near Arras. The day was quiet, when Alfred was in the support trench he was hit by shellfire, and died. He was aged 22. According to his college, ‘if he was somewhat reserved in character, he yet possessed remarkable qualities of strength and judgement’. He is buried in the London Cemetery, Neuville-Vitasse.