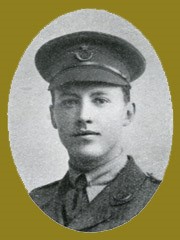 Charles attended Wesley Memorial Church as a student but enlisted within weeks.

Charles Frederick Batty was born in Iowa, USA, in 1896, after his parents had emigrated to America from Lancashire, where his father had been a miner.

They were back in England by 1899, when Charles’s brother Philip was born in Darlington. In 1901 they lived in a large household with Eliza’s mother and siblings. Charles’s father was working as a Provisions Agent and apparently did well, as in 1909 Charles was sent to Mill Hill School in London. He played in the cricket first eleven.

He won a classics scholarship to University College Oxford, starting in 1914. He joined the Officers’ Training Corps, but within weeks he returned home to enlist.

On 28 November 1914 Charles was commissioned Second Lieutenant in the Durham Light Infantry, although he did not reach France until 23 October 1915. By 1916 he had started as a Bomb Officer in the trenches at Ypres. He was killed very soon, on 19 January, not in battle but as part of the day to day attrition of the war, perhaps hit by a sniper or shell. He was aged 19.

“The men were devoted to him”

His body was recovered and he is buried at Essex Farm cemetery. His senior Bombing Officer wrote “I cannot tell you how sorry I am to lose him. I thought him most promising and the men were devoted to him”.

Very poignantly Charles’s brother Philip, who in the Second World War was a captain, was killed in France in 1940: their parents were still alive.