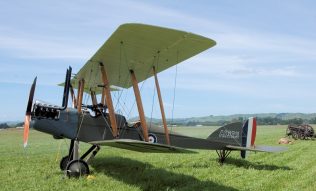 Horace was eager for action and lied about his age to join the Royal Fusiliers when he was 16. He was soon stood down. At 18 he was accepted by the Royal Flying Corps but died in night flying training.

Son of a commercial traveller

Horace Gregory Cleaver was born in Oxford in 1899. By the 1911 census he was surrounded by six brothers and three sisters and was at school. His father was a commercial traveller in grocery and boot retail, and Horace became a solicitor’s clerk.

Lied about his age

At the start of the war Horace was too young to enlist, but in 1916 he joined the 29th Royal Fusiliers claiming to be 19, old enough to serve overseas. He became a Private but his lie was discovered and after a few months he returned to being a solicitor’s clerk pending recall on his 19th birthday in 1918.

The ambition of flying seems to have guided Horace’s next move. Probably his interest had developed from watching planes at Port Meadow near his family home, as this had been an airfield since 1911 and became busier as the war continued. Just after his 18th birthday he joined the Royal Flying Corps and after only three months he was appointed Second Lieutenant and a trainee pilot. It was noted that he was “keen and efficient”.

Horace joined the 199 Night Training Squadron as a bomber pilot in a biplane. This was dangerous work, and sadly he died at East Retford in Nottinghamshire on 17 March 1918 in a flying accident, aged 18. If he had been less eager to be in action he could still have been at home awaiting his recall to the Royal Fusiliers in May. The family buried him at Wolvercote Cemetery, and perhaps it was some comfort to them that he had realised his dream of flying.