You are here: HomenextObjectsnextCeramicsnextJohn Wesley statuette 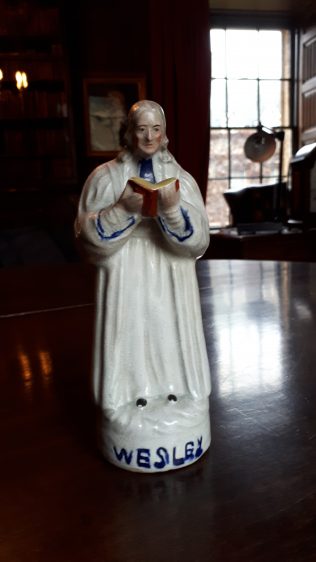 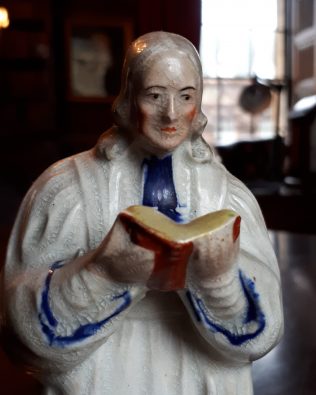 This ceramic statuette of John Wesley has no pretensions to artistic merit but it tells an important story.

Ceramic ‘fairings’, inexpensive ceramic ornaments such as this one, were mass produced in the late 19th century. Originally so named as they were given away as prizes, some were made for direct sale, as was probably the case with this example.

For Methodists who had very limited means to have spent some of their limited funds on such an item, is an indication of the respect in which Wesley was still held even 100 years after his death.

Despite its simple moulding and naive colouring, the piece still manages to convey something of the holiness of the man, known as the Father of Methodism.

To place such an item on display in a humble home was a tribute to the man but also an identification of belonging within the burgeoning Methodist movement.

As an underrated piece of material culture it has made an interesting journey from humble home to College room.

It is now part of the Methodist Collection at Lincoln College, Oxford.