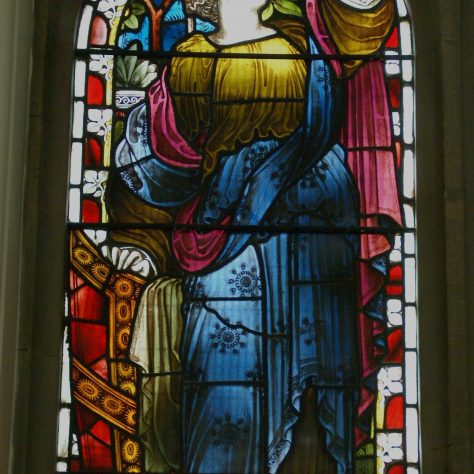 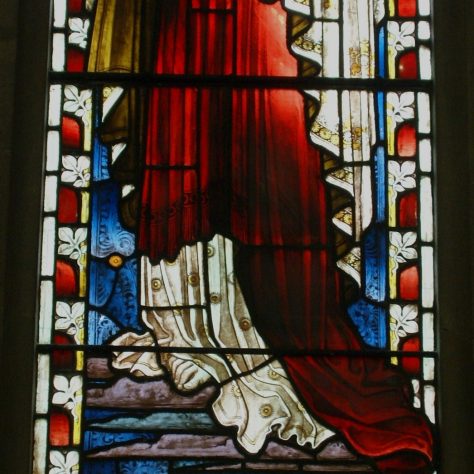 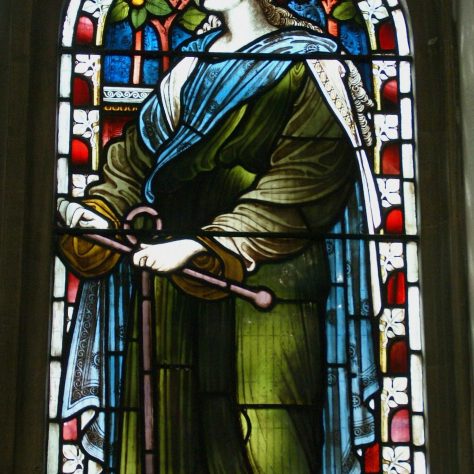 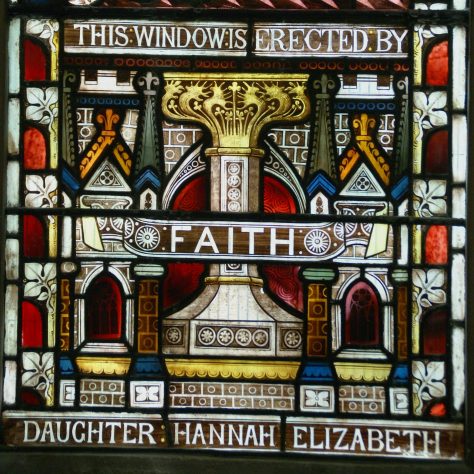 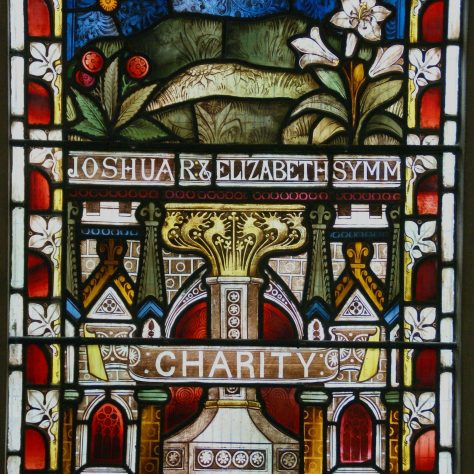 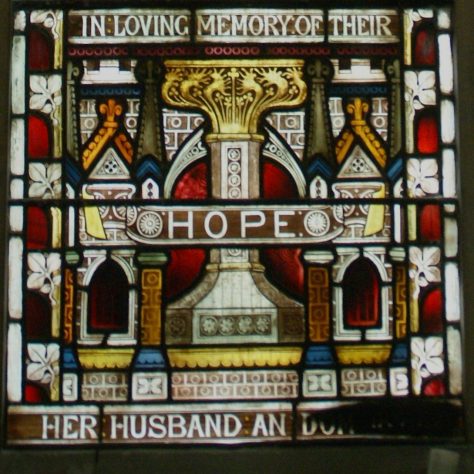 Featuring three female figures representing the key Christian characteristics of faith, hope and charity (or love), this window was given by Joshua and Elizabeth Symm in memory of their daughter and son-in-law.

Who were the Symms?

Joshua and Elizabeth Symm were dedicated members of the Methodist Society in Oxford. Joshua Symm’s building firm was responsible for building Wesley Memorial Church which opened in 1878.

Joshua and Elizabeth had only one surviving child, Hannah, born in 1845. Sadly she began to suffer from ill-health as a young woman. Despite this Hannah took an active interest in church life and became a church member during the ministry of Rev Philip B Wamsley. She taught in the Sunday School and for a while sang in the choir. As her health deteriorated her parents made repeated attempts to improve her condition, by taking her to stay in warmer climates nearer the sea.

Whilst in Torquay, Hannah met, and then married a local surgeon Joseph Lawton, the son of a Methodist minister. Sadly their married life was short. A trip to Mentone was undertaken but her condition did not improve. She returned to the family home in Oxford where she died in 1875. Joseph also suffered ill health and after travelling abroad died at sea in 1878.

Joshua and Elizabeth Symm  chose a representation of the bible verse “And now abideth faith, hope, charity, these three; and the greatest of these is charity.” (1 Corinthians 13 v 13, from the King James version of the bible.) for this memorial window. In this context charity would have the same meaning as Christian love.

Faith is shown pointing to heaven, love is in the centre, her hands crossed on her heart and hope stands holding an anchor – recalling the bible verse “We have this hope as an anchor for the soul, firm and steadfast.” (Hebrews 6 v 9)

Two great passages of the New Testament, this dedication sums up the heart of the Christian message. It was perhaps both a tribute to their daughter and son-in-law as well as a statement of faith in a time of great adversity.

“This window is erected by Joshua R and Elizabeth Symm in loving memory of their daughter Hannah Elizabeth and Joseph Lawton MD her husband An. Dom. 1878.”

A lengthy and detailed obituary for Hannah appeared in the City Magazine, a Methodist publication, written by a ‘Miss Butterworth’ – perhaps a friend of Hannah’s. The writing is of a particular style reflecting an era when an account of a so-called ‘good death’ could inspire others to greater faith.  The summary of Hannah’s life is drawn from this full account, which can be accessed below.