You are here: HomenextObjectsnextMiscellaneousnextCradle roll certificate 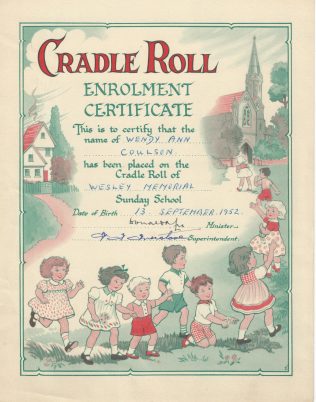 A chance find when sorting out paperwork has led Wendy Spray (nee Coulson) to reflect on the unconscious bias in her cradle roll certificate but also on the way in which Christian values were powerfully demonstrated by those who led the youth group at Wesley Memorial. She writes:

“I found my Cradle Roll certificate the other day in amongst my degree certificates! It made me laugh, but also horrified me somewhat as it paints such a strange picture of what Wesley Mem(orial) Junior church was like.

We weren’t dancing through the meadows picking daisies on the way to church, we were in the middle of town! We weren’t homogeneously white and it makes me realise how it must have been even tougher than now for those in the church who weren’t white: Bernard and Jean from St Kitts, the Busia family from Ghana. I hope our friendship and fellowship was warmer than this certificate suggests. I think they were. My friendship with Abena Busia continues to this day.

Inevitably my strongest memory of Junior Church is queuing up at the end for a sweet! We were a family rarely allowed sweets, so that was special. The rest is a bit hazy, except for lots of sessions in the John Wesley Room and the occasional visit to Hill End and a very cold swimming pool!

In my teenage years I have very warm memories of the youth group led by Don and Carol Brand, which influenced me greatly at the time and I suspect has continued to do so ever since. Don and Carol showed us the importance of living out our Christian faith through social action. As an example, they had us painting a house that was being got ready for a family to move into. Don was a social worker and Carol a nurse – so they knew the tougher side of life in Oxford.

The activities were fun and the group strong enough that I felt able to bring along a friend from school from a non-Christian family. Don and Carol role modelled living by Christian values. They still do and we are still in touch. Junior Church and Wesley Mem helped to give me crucial foundations in my Christian beliefs that I was able to build on in later in life.”

Baptism of children when they are young recognises that God loves us first before we are able to acknowledge it. A cradle roll certificate is given to the family of a baby or young child when they are baptised, in recognition of the child becoming part of the church family. In baptism, the congregation promises to support the Christian upbringing of children. It is hoped that, as in Wendy’s case, they will join the Junior Church and in time be confirmed as members of the Church.