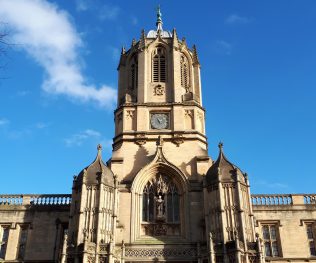 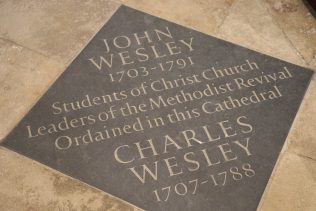 No Wesley-themed visit to Oxford can be complete without a visit to Christ Church.

Christ Church is a college of the University of Oxford and the college chapel also serves as the cathedral church for the Diocese of Oxford.

All three Wesley brothers attended Christ Church as undergraduates. Samuel had graduated by the time John matriculated in 1720. John became a Fellow of Lincoln as Charles arrived in 1726.

It was while he was at Christ Church that Charles, beginning to take his faith more seriously, began to meet with friends to study the bible and pray together. This was the beginning of what John Wesley would later describe as the ‘first rise of Methodism’.

The landmark Tom Tower at the entrance to Tom Quad was completed in 1682 and designed by Christopher Wren. The whole view from St Aldates through to the quad would have been a familiar one to the Wesley brothers – in fact much at Christ Church remains the same.

The Great Hall features an array of portraits including one of John Wesley by George Romney.

A memorial to John and Charles Wesley can be found set into the floor close to the steps to the pulpit in the Cathedral.

Entrance to the Cathedral is via the visitor centre on Christ Church meadow. Walk down St Aldates past Tom Tower and enter the college grounds via the Memorial Garden.

There is an admission charge.