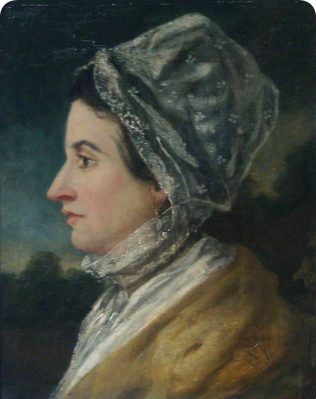 Susanna Wesley, the daughter of Dr Samuel Annesley and Mary White, was born in London in 1669.

Samuel Annesley was a prominent, scholarly puritan and non-conformist pastor. He allowed his daughters free access to his considerable library of books and they responded by reading widely.

At the age of 13, Susanna decided to join the Church Of England, a decision which her father surprisingly accepted. She married Samuel Wesley on 10 November 1688 when she was 19. They were well matched but both headstrong which lead to some difficult periods in their marriage.

The growing family moved to Epworth in Lincolnshire in 1697 when Samuel was appointed Rector. Never good with money, Samuel’s financial situation worsened with the years. Susanna bore the brunt of the impact on her family, especially when Samuel was imprisoned for debt in 1705.

Samuel and Susanna had 10 children who survived to adulthood, in addition to nine others who died as infants. Susannah took the responsibility for educating her family extremely seriously, teaching the girls as well as the boys to read and write.

She established a regular routine of lessons, individual interviews with her children and delivered a curriculum of religious instruction. Following a devastating fire at Epworth Rectory in 1709, some of the children were sent to live for a period with friends and relatives, a situation Susanna found very challenging, not least because she was unable to supervise their education so closely.

Susanna’s approach, sometimes misleadingly reduced to the phrase that children should “fear the rod and learn to cry softly”, has been much criticised in recent years. Susannah’s principle concern was to ensure her children’s spiritual wellbeing. She demonstrated a disciplined Christian life to her children by interspersing her busy days with withdrawal to her closet for private devotions and by exercising forbearance towards her difficult husband.

She shared her approach to parenting with her husband by letter (while he was away from home during breaches in their marriage) and in later life, again by letter, with her son John. Susanna wrote regularly to all her children, including John and Charles whilst they were at Oxford. Her sons , in particular, continued to turn to her for advice and support in their adulthood.

Although initially concerned about her sons’ new found religious enthusiasm, she became convinced of the value of their work and one of its greatest supporters. She encouraged John to accept that lay people could and should preach, which was to have profound affect on the development of the Methodist movement.

After Samuel’s death  in 1735, Susanna went to live with her son Samuel, then daughter Martha before settling with John at the Foundry in London, where she lived for the last three years of her life. She is buried at Bunhill Fields, opposite John Wesley’s Chapel.