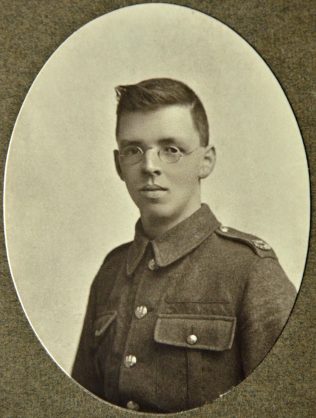 Walter completed his BA at Oxford in 1914 and was an early volunteer at Leeds.

Walter Lanning Bradfield was born on 4 June 1892 in Leicester. His father was the Rev William Bradfield who was a Wesleyan Methodist minister. At the age of eleven Walter became a day boy at The Leys School, Cambridge. Then his father was appointed as Warden of Wesley Deaconess Institute, Ilkley.

Walter moved to Bradford Grammar School. He won an exhibition in History at Jesus College Oxford in 1911, and joined the University Officers’ Training Corps. He completed his BA in the summer of 1914.

In early September 1914 he was one of the first volunteers for the Leeds Pals, the 15th Battalion of the West Yorkshire regiment. His background qualified him for a commission as an officer, but he seems to have deliberately chosen to enlist as a private.

The battalion’s first months were spent training. In December 1915 it was ordered to Egypt, but Walter was kept in reserve and re-joined the unit when it returned to France in April 1916.

The battalion was in action at the Somme in July, with heavy losses. Walter would have been lucky to survive unscathed, but was perhaps still in reserve. Then from mid-October the unit provided working parties. This involved spending several days at a time in the trenches, and on 5 December 1916 Walter was killed by a German shell.

A good man and a brave soldier

He was aged 24. His commanding officer described him as a good man and a brave soldier, a conscientious man they could ill afford to lose. He was buried in Couin British cemetery.